About The Chelsea Antiques Fair

As new owners of The Chelsea Antiques Fair, 2Covet aims to continue connecting discerning antique collectors, interior designers and art enthusiasts with the best dealers in the world.

With a passion for art and antiques at the core of 2Covet, we hope The Chelsea Antiques Fair can become a trusted place for antiquarians to explore within the traditional fair model, reinforced by the foundations of the 2Covet online marketplace.

Having organised 65 Chelsea fairs, previous owner Caroline Penman has now passed the baton to 2Covet, who will continue to support the antiques trade whilst maintaining the longstanding tradition of the antique fair.

Continue the story with us in 2021, for the first Chelsea Antiques Fair in partnership with 2Covet. 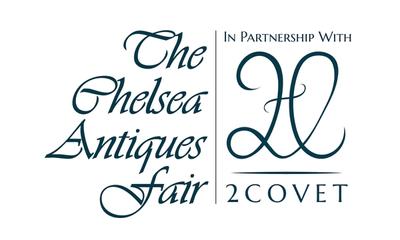 Scroll down to unveil the History of The Chelsea Antiques Fair

In 1950, the chief Librarian, Mrs Schultz, in Chelsea Old Town Hall was tasked with organising an antiques fair, as antiques were quite in fashion in London. This she did, for one year, then passed the Fair onto a “commercial contractor”. This was Josephine Graham Ballin and her husband Donald who were antique dealers with a shop in St Albans. The Fair business was named Antique Dealers (Exhibitors and Organisers) Limited. They started the “First” Fair in Aug/September 1951 with Irene Worth as the opener. It ran for 15 days. There were 26 exhibitors, including Ian Askew, Richard Ogden, Alexander Podd, Geoffrey Van.

In October 1952, the Chenil Galleries (westward along Kings Road) loaned their Hall and the Fair was extended to this and the side corridors. Opened by the Dowager Baroness Willingdon, the 14 day fair had 54 exhibitors now adding (amongst others) Appleby Brothers, Baynton Williams, Margaret Cadman, Pawsey & Payne and Sylvia Sheppard. There was a small Loan Exhibition of a 16th century portrait of Sir Robert Dudley which was on loan from Penshurst Place, Kent. The addition of the Loan Exhibition continued for decades, providing a useful extra source of PR.

By 1955 the Fair ran for 11 days (but closed on Sunday) and included 39 exhibitors, adding in the Small Hall instead of Chenil Galleries. Fresh exhibitors of note: Beauchamp Gallery, Dunnings, J Graham-Ballin herself, Michael Inchbald, Newman & Newman and Leonard Spero. The Fair included numerous packers and shippers and the publishers of the main Antiques publications.

The Fair continued as an annual autumn Fair until 1960 when

1960’s the Fair was open for 10 days, Spring and Autumn (closed on Sundays). There were celebrity Openers, including Sir Cecil Beaton, Lord and Lady Longford, Pietro Annigoni, and the Rt Hon Sir Edward Heath. Almost always there was a Loan Exhibition in the front corridor including Locks, Chessmen, Teapots, Dolls and Musical Boxes.

1970’s Chelsea Antiques Fair was quite the social occasion, on a par with the Chelsea Flower Show. It was subject to Sunday trading laws, so was closed on Sundays until 1994. A brilliant PR lady was employed, Heather McConnell, who was instrumental in making the Fair famous across the world, especially in the USA. To this day, ask an elderly American to name an Antiques Fair in England and Chelsea will be the answer! Locally too, fashionable Chelsea residents flocked to the Fair, a highlight of their season. Outstanding exhibitors in the 1970’s: Robin Bellamy, E M Cheshire, Mary Cooke, Commander Coxon, Thomas Couborne, Gordon Sutcliffe, Michael Foster, Stafford Lorie, W R Harvey, Eleanor Hutton, Klaber & Klaber, Daniel Mankowitz, Philp, Joan Roger and O F Wilson to name but a few.

Organiser Josephine ran a tight ship and kept standards very high, with a strict vetting committee and a dateline of 1830 for everything on sale. However, this took its toll on her, and at the

March 1982 fair, her 58th Fair, having secured the Duke of Westminster to be the opener for September, and taken all the stand rents, she passed away overnight in the middle of the Fair. The Fair was then put up for sealed bids.Caroline Penman now appears on the scene, a Dealer since she was 18, and a fairs organiser too.

She was the successful bidder and ran her first Fair (which was actually the 59th Chelsea) on 11-22 September 1984 with the Duke of Westminster as opener – starting at the deep end! Fresh stand-fitting brought the Fair a new sparkle. The Fair entailed more than two weeks’ tenancy in

1985, the first two days being needed to allow in the GPO to install land-lines for each and every stand… cables everywhere! This continued for a few years until mobile phones were gradually introduced.

In the 1980’s and 1990’s the Chelsea Antiques Fair continued from strength to strength, enjoying its heyday, with top flight Dealers selling fine art and antiques to a keen and knowledgeable audience from across the world as well as just around the corner! TV cameras often covered the Fair live and publicity played a big role. Tony Gill was Press Officer, and achieved very good coverage, hence the number of visitors at the Fairs regularly exceeded 8,000 over the 10 days. Following Tony’s retirement, Duncan Phillips took on the PR role with one outstanding success when Hiscock and Shepherd exhibited an Elephant Bird’s egg, which Duncan held in front of his face for the cameras, making it seem the egg was a human face, leading to half a page coverage in the Telegraph as well as TV and many other papers.

During these golden years, openers were often involved with a charity supported by the Fair. Most memorable was when Brian Rix opened the Fair in 1989 in aid of Mencap and the Fair advertised itself along Kings Road with a horse-drawn bus bringing visitors from Sloane Square! Other charities supported by the fair included Childline, with Esther Rantzen, The Red Cross with Leslie Philips, Radar with the Rt Hon Earl of Snowdon and Barnardos with Henry Sandon.

2000 the Fair celebrated its 50th year, with a golden jubilee celebration in September, and a special commemorative catalogue, displays of historical pictures, press cuttings and catalogues and a party for all previous exhibitors. During almost all the second half of the 20th Century the Fair ran for ten days in March and September, always full of highly respected British Dealers, strict vetting and a prestigious international following. Dealers who exhibited included; Peter Bunting Antiques, Brian Watson Antique Glass and Wakelin & Linfield.

In 2006 The Chelsea Antiques Fair celebrated its

It was a struggle for The Chelsea Antiques Fair to compete with the BADA Fair, and in

2005-2008 the March Fair was down-graded, so as not to compete with BADA Fair, and became a 3 or 4 day event entitled “The KINGS ROAD Antiques Fair”. However, from 2009 the Chelsea title returned and it became a 5-day Fair competing with BADA, running at the same time, so collectors could visit the two fairs on the same day. It became clear the September was the more successful date for The Chelsea Antiques Fair.

Then, in 2010 the September date also came under threat, with LAPADA establishing the Berkeley Square

LAPADA Show in mid-September. It was too distant for collectors to visit both Fairs, so reluctantly the September Fair had to be dropped, concentrating on March only from 2015.

There were just too many exhibitors who were divided between

In 2019, Caroline began searching for a new owner of Chelsea – at 75, she wanted to reduce the stress levels and having

run 65 Chelsea Fairs since 1984, she had run out of innovative ideas to keep the Fair “fresh”. A few individuals were interested, but nothing came of negotiations, so Caroline forged ahead, planning a 3-day economic (and, hopefully, less stressful) fair in 2020.

Meanwhile, BADA had sold the BADA Fair to Thomas Woodham-Smith who re-named it “The Open Art Fair”, with mainly BADA exhibitors, still running at the same time as Chelsea. This new Fair was a major undertaking and the marquee was being erected when Covid-19 intervened. Fortunately, The Chelsea Antique Fair was in a better situation, with no on-site preparations underway. So the decision was made to cancel our Antiques fair, a week before it was due to open on

Caroline renewed her efforts trying to find a new organiser with more optimism for the future. Former exhibitor Peter Bunting was keen to see Chelsea return to its former glory and introduced to Caroline a company who might fit the bill…

The story continues... 2Covet has taken over The Chelsea Antiques Fair and we are bringing new life into the event and the Old Town Hall - post Covid! We are delighted to announce the appointment of our New Fair Director, Sophie Wood, who has joined the 2Covet team from LAPADA and we have released our up and coming Fair dates. The 2Covet Chelsea Antiques Fair will be held from the 21st of September to the 26th of September 2021 - An invitation only preview will held on Monday 20th September 2021.

We look forward to continuing the incredible history of The Chelsea Antiques Fair.